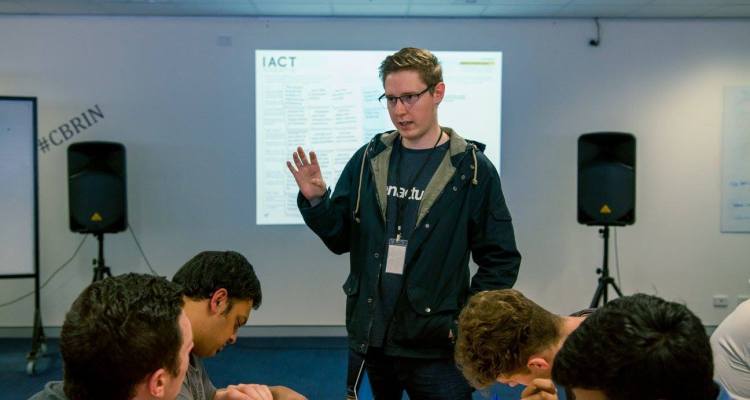 If 2016 is the year of the political outsider, then James Sellers is positioning himself as the Bernie Sanders of the UCSA election.

Sitting down to chat with me, James is quietly confident that his non-political approach to politics will be the difference in this campaign, despite murmurs that he is only making up the numbers.

“I’m not running [for the UCSA] for a political career. It won’t even appear on my resume,” said Sellers.

As the president of Enactus on the UC Campus, James believes that he has shown the skills needed to implement policy rather than just talk about it.

And his record speaks for itself. Recently the Enactus Canberra group won an award for a program focussed on providing hospitality training to high school students. It’s this sense of running the UCSA as a student-led business rather than a political platform that Sellers believes sets him apart from his opposition.

Part of the problem that Sellers feels is that students do not know who their UCSA representatives are and what they actual do for students, admitting that it took him until his third year until taking notice. He thinks that this needs to change.

“I’m really big on transparency. There should be access to each to each of the [UCSA office] positions with students being able to book time to talk.”

But for Sellers the biggest problem might be the fact that he is running as a sole candidate without a ticket to help campaign for him. Whatever the outcome of the election, it’s expected that he’ll have to work with candidates from the other tickets.

“Running societies [such as Enactus] has taught me how to work with students that I don’t know,” he said.

“I am willing to work with anyone who’s a team player, and that includes Terry [Watson] and Darcy [Egan].”

Sellers has also built ties with many of the clubs and societies on campus, and wants to build ties with the UC Union.

With a lot of work still to do to raise his profile on campus before the start of the poll on October 31, James Sellers believes that he is the best candidate to take politics out of the UCSA and implement policy in the best interest of the students.

Student Services Amenities Fee (SSAF): Sellers sees the SSAF as a key to his plans for transparency. He believes as it is student money, it’s important to know where it’s going. With spending regularly in the public domain, he believes this could drive interest within particular areas of the USCA.

Smoking: While Sellers is cautious when it comes to smoking, he would push the university to reconsider designated smoking areas on campus, while backing enforcement of the current policy outside these areas.

Parking: Sellers wants to push for more parking on campus. He also thinks that it’s important to lobby for on-campus parking to be put back into the hands of UC rather than the ACT government. However, regardless of who gets the money, he doesn’t want students abused for raising revenue.

Transparency: Sellers wants students to have face-to-face meetings with the UCSA officers, and thinks the more transparent he is, the more the students will feel like they are being worked with.

National Union of Students: Sellers needs more information about how the UCSA is affiliated before making a decision.