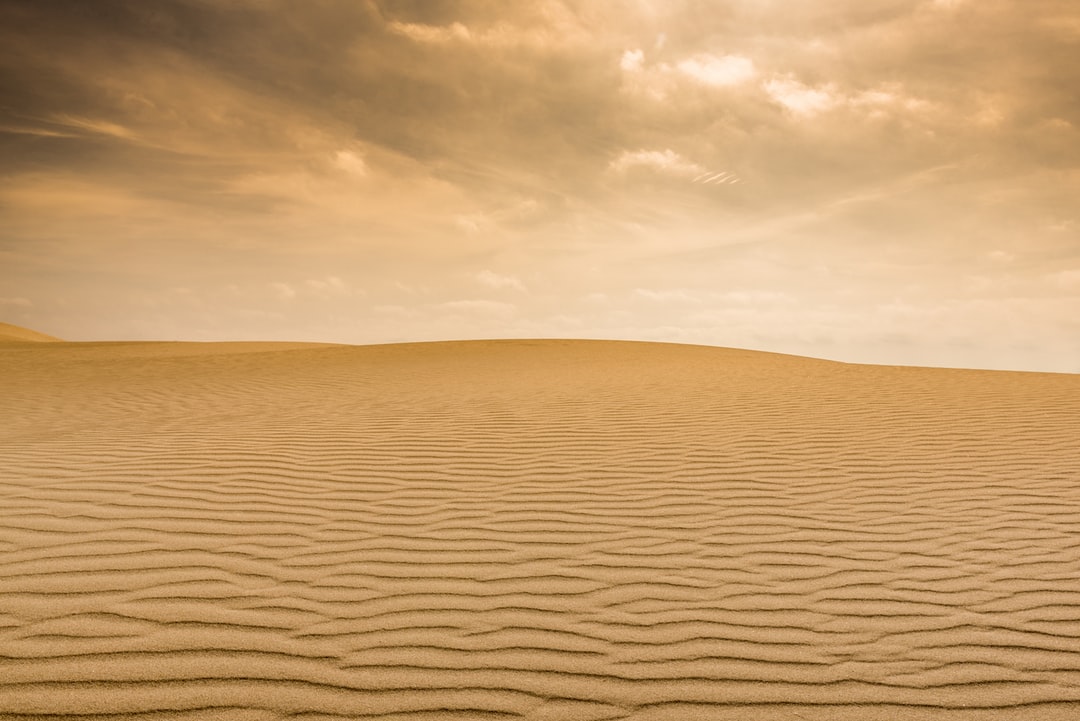 A sea of sand dissolves into the horizon; a red landscape against an equally red sky, angry with the sun. The heat from the ground creates illusions; a promise of water leading fools to their death. There is no relief, no water or welcoming shade. The heat sucks the moisture from everything, causing skin to crack, and throats to burn.

Against the hostile land, a figure emerges from an escarpment. The image, draped in dirty cloth from head to foot, confidently hops from outcrop to pale rocky bank, moving across to a shrinking stretch of shade. Here the form pauses, seems to breathe heavily, and squints deliberately towards the setting sun as if calculating the time of its demise. As the gas giant sinks slowly past the horizon, the heat quickly begins to seep from the surrounding landscape.

The small individual, an image of vulnerability against such harsh conditions, continues towards its destination. Not far from this position a giant boulder rises from the sea of grit. A face, half drowned in the ever-moving tide of sand, stares blankly towards a long-forgotten point of reference. Perhaps all-knowing and powerful at one time, the giant’s gaze now seems lifeless, hollow, and resigned to a life under the burning ground, the green tinge of the form’s face a brilliant defiance against the monotonous landscape.

The figure continues past the monument with determination, aiming for a mountainous dune rising directly behind it. At the dune’s summit emerges another giant statue in the same chalky green as the head.

A surging wind rolls over the expansive mass of sand, redistributing large deposits of the ochre coloured grit. The rustle of millions of grains of sand being displaced and thrown around by the wind is the desert’s voice; ‘shhhhhHHHH’ it demands. It shudders and whistles, turning around to buffet the figure over and over. Sand invades every part of the body. Sand coats hair, gets caught in eyebrows, between toes, under fingernails. At times it even feels like the inside of your eyelids are packed with sand. It is never-ending; a force which oppresses imagination, dreams, the will to live.

The figure suddenly springs forward, attacking the steepness of the dune with ferocity and strength, all limbs working in unison. At the pinnacle, the monument dwarfs the silhouette as it leans out beyond the dune and casts a long shadow across the ground. The figure creeps forward and knocks rhythmically at the statue. The ringing echo reveals the monument is made from a metallic material.

Beyond the walls of the statue a scraping and shuffling is heard. A harsh grating noise punctuates the continued attack from the wind, and a crack appears in the swirling green façade. The figure intuitively shrinks in on itself, and creeps in through the opening. Once beyond the threshold another figure slams the panel back in place, locking out the aggressive desert wind.

The new being is an old woman, white curls cropped close to her skull, brown eyes hinting at a wealth of knowledge and limitless patience.

Greeting the older woman by casting off the dusty rags protecting face, hair and eyes. The figure is a young woman, fuzz of black hair insulating the surface of her scalp. Dark skin is crusted with a powder of red sand which glitters in the candle light.

The space inside the statue is a bubble of solitude. Soft light from the candles reveal a humble living area. The ground is the same red sand from outside, and the walls are made from the same light green metal. Figures scrawled on the walls depict star positions, and pictures of found artefacts. The ceiling of the statue is interspersed with cracked or shattered panes of glass, letting some of the failing light from outside cast shadows against the walls.

On the far side of the cavern is a hammock made from woven plastic scraps, strung up by thick wire; a valuable asset. A table made from fragments of metal holds various curios, found objects, and a ceramic pot.

The pot cradles something within its grasp.

“Meema what is that?” The girl whispers. The oppressive desert outside steals most voices away.

Both women cross the short distance to the pot.

“This, child, is a flower.” The puff of yellow fingers resembles a miniature high-noon sun atop of a green spindly stem.

The girl stares at the plant in wonder, bending down to observe it at eye level.

“Flowers once existed in abundance, young one,” Meema says with a touch of regret in her quiet voice. “Why not anymore?”

“Sit, and I will tell you a story you must heed.”

Meema and the girl cross to a section of the floor layered with plastic woven mats, and a big stone. Meema reclines slowly onto the stone surface, while the girl perches herself on the floor by Meema’s feet.

“They say that the land was once lush and full of vegetation…”Meema begins in her deep, rich voice.

“They say that the seas were once teeming with intelligent beasts… The skies were once dancing with life… until the Lady of the Land, mother of all things, took them from us.”

The wind howls outside the statue. The sun finally disappears beyond the horizon, throwing the room into darkness punctuated by candlelight.

“The god Cupo cursed Mother Earth, making her fall in love with a mortal. To show her love and devotion, The Mother showered him with gifts.  The sky was full of chatter and song, the land was covered with plants, flowers, and food. There were oceans and streams, and everything was well.”

Meema looked deep into the girl’s eyes to make sure she was listening.

“But the man was not in love with Mother Earth and took for granted all of her gifts. He was ungrateful and demanded more. When The Mother refused, he began to take what he wanted; plundering the deep valleys for oils, neglecting the land, and polluting the waters. Hurt by her mortal lover she took away all that she had given: the oceans and streams dried up, animals and plants mostly disappeared. The song of the world turned sad and quiet. This is the legacy that our ancestors left us with.”

A tear courses down Meema’s cheek, following a wrinkle from nose to mouth.

“That was so long ago!” The girl objects.

“Yes, perhaps thousands of years in fact, but remember child, even a hundred years is but a blink of an eye to a god. Although her mortal lover died of old age many centuries ago, we are still paying a price for greed and selfishness. Earth mother is still angry, and we may not see the grace of her forgiveness touch the land in your lifetime…”

A soft vibration catches their attention. They notice a small yellow and black object dancing through the air, and alight on the flower.

“Perhaps we are not lost.”