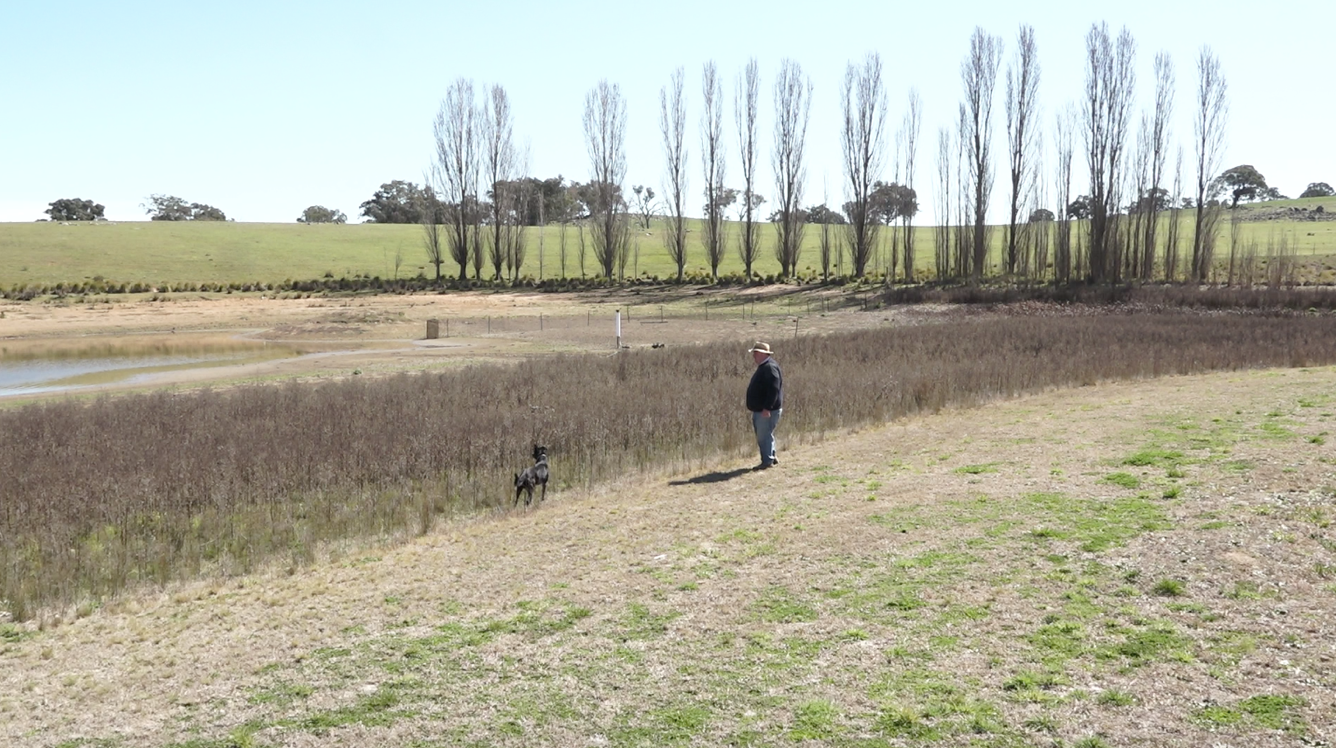 “I’ve been running my property for over 40 years and I have never seen it this bad, my dam has just about dried up and I don’t know what I will do when we run out of water.”

Daniel McGrath is a sixth-generation local farmer and grazier living in the small country town of Boorowa, New South Wales. He has lived in this sheep farming community his whole life, taking over the farm from his late father.

Boorowa, known for its fine merino wool, received less than half its average rainfall for the year so far.

Mr McGrath said that he relies on the water from his bore to ensure he has a water supply since the town water doesn’t reach as far as his property.

“Without rainfall I have nothing to sustain my land. It’s a problem that effects not only me and my family but my livestock and other properties around me.”

Without this water and with his dams nearly running dry he needs to rethink his situation, and the above record temperatures forecasted for the remainder of the year are not helping. But Boorowa isn’t the only small community in trouble.

Farmers across New South Wales are struggling in what has been called the worst drought in living memory with ongoing costs of running properties and feeding animals plummeting.

“In the last two weeks I’ve had to start hand feeding my sheep, and have spent over $40,000 on hay and grain just to keep my animals alive.”

“This will last me until March next year but it is a constant ongoing cost that has to be done otherwise I won’t be able to keep my property running,” Mr McGrath said.

His wife commutes into Canberra daily for employment as there isn’t enough income coming in off the land alone.

His three children have also had to find work and travel into neighbouring towns, such as Young and Cootamundra, to seek employment.

“My sons would love to come home and work on the farm but it wouldn’t be viable for them and there just wouldn’t be a living in it for them,” Mr McGrath said. “It’s hard to tell them that doing what they love isn’t the best option for their future.”

For those who have remained working and running businesses in this town, they say they are also feeling the heat of this drought.

Tom Corkhill owns and runs a local agriculture and agronomy service shop in Boorowa. He said that the drought has certainly affected his business.

“The farmers aren’t buying what they usually would be buying which are their add ons that includes fencing and small improvements.

“We have had to diversify in the products we sell and it’s been challenging finding products and sourcing the right one for the right situation, but that’s what we’ve got to do to keep the doors open and the business ticking,” he said.

Mr Corkhill said he relies on his regular customers and is always finding ways to help the farmers source products that they need in order to keep their animals alive.

“In times like this it’s really important that we stand together as a community to make sure all of our livelihoods survive,” he said.

However, it is important to remember that the impact of this drought isn’t restricted to just the livelihood of the farmers, small businesses and the land, but also the resident’s mental health.

Farmers mental health can decline in severe climate events, such as the drought, and can poorly affect their working and habits.

Ally Corkhill is a mental health nurse in Boorowa and has seen the struggles that these farmers are facing.

Being from Boorowa herself, Mrs Corkhill has noticed the reluctancy of farmers to seek help and the hardships that are contributing to poor mental health.

She said one of the biggest hardships she has seen is financial because there is a lack of services and help that are free nowadays.

“It is quite easy to get in to see your GP but there is a lack of services that are free to the person accessing the help and there are a lot that cost money.

“During the hard times we are having at the moment, people are finding it challenging to obtain the cash for anything, let alone mental health services,” Mrs Corkhill said.

She also explained that there is still a large stigma attached to males being the financial provider of the household, which is particularly prominent in rural and remote areas.

“In farming communities there has always been a lot of pressure on the man of the house to be the very strong, stoic figure and to provide for their family, and when that’s not happening there are a lot of self-esteem issues that can impact on their mental health,” Mrs Corkhill says.

Many farmers also have a strong emotional attachment to the land they are on because it has been in their family for generations. The risk of losing this land and not being able to pass it on to their children is a reoccurring nightmare.

“If you are born and bred on a farm, that is what you want to pass on to your children and you want them to have the same opportunities that you’ve had. This pressure has a huge impact on the farmers as well,” Mrs Corkhill says.

Mrs Corkhill doesn’t expect that things will get any better for these farmers as the forecast rainfall for the remainder of the year is to be below average across the country.

Daniel McGrath says that although these times are extremely tough, giving up is not an option.

“Farming is all I’ve ever known and it’s not something that you can just walk away from.”

“I don’t know what will happen when we run out of water but I just have to take it day-by-day, do the best that I can to keep my animals alive, and keep our fingers crossed that we get some rain,” he said.