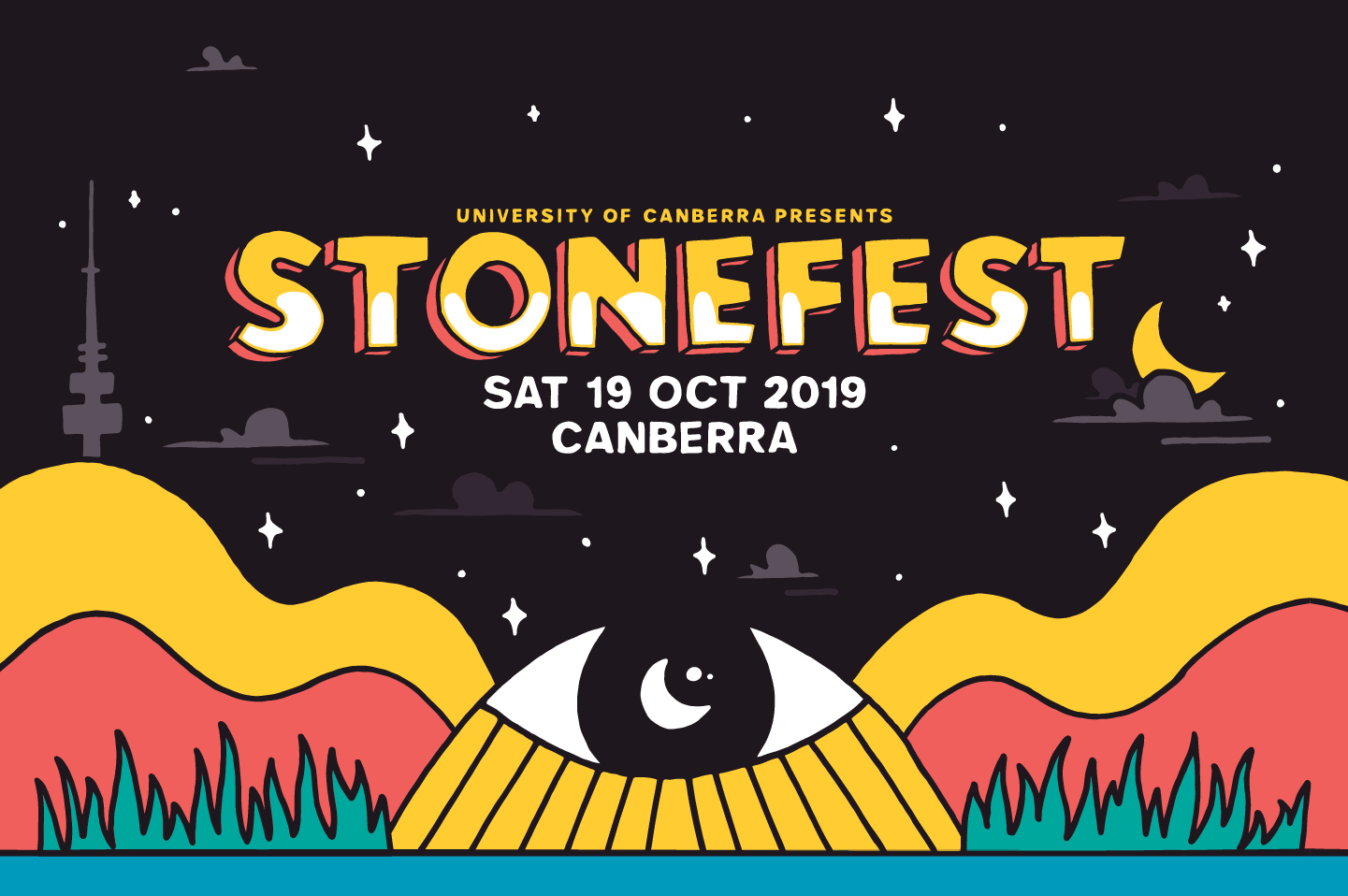 Back in its day, Stonefest was a University of Canberra Staple, bringing musical acts from all over Australia in celebration of the founding of UC.

After its hiatus, it’s made a long-anticipated comeback that lived up to the hype the festival brings.

The artists who performed are well-substantiated in the Australian music scene and beyond. They included Thelma Plum, Japanese Wallpaper, Sampha the Great, Mallrat, Skeggs, Example and British India. Some of the acts included Canberra locals, like Genesis Owusu, Teen Jesus and the Jean Teasers.

Each musician brought a level of professionalism, vulnerability, hype and an overall instinct to get the audience to dance.

Stonefest, as a whole, was an incredibly successful festival, creating an atmosphere of community and togetherness, and overall good times. Perhaps the only thing that could be improved would be its singular food truck which was expected to feed the entire festival, but despite this was incredibly delicious!

Entering the festival was smooth sailing, and while waiting in line the faint base from music could be heard from the refectory. It created this electric atmosphere, everyone sharing the same excitement. I was beginning to regret not bringing a jumper as the night spring air was fresh.

Unfortunately, I arrived late to Genesis Owusu’s set, but what I did see totally won me over.

My previous regrets of not bringing a jumper were overcome because Owusu really brought on the heat. On stage, the man oozed confidence. Delivering music that is equal times hype and lyrically intelligent, it was one of the best sets of the day. Surrounded by “The Goons”, a collection of his close friends essentially acting as back up dancers and overall hype machines, it added a sense of community and togetherness to his set. With matching outfits and loose rose petals being thrown around, it immediately made me want to be a part of his crew as well. Genesis Owusu is definitely one to look out for, what with his new single “Good Times” made with the likes of the Free Nationals, who have previously worked with Anderson Paak. The single delivered in the live performance, almost as good, or better than, the studio version. Genesis Owusu has a bright future ahead of him, and I’ll definitely try and catch a whole set or a solo show of his again soon, because as I have now learnt, it is not one to miss out on.

After Genesis Owusu, I had a drink, and the Red Frogs team provided adequate sugar spikes for maximum dancing. I went downstairs to see what the Hub was like (it was small and intimate and packed with people), before going back to the Refectory for Japanese Wallpaper.

Japanese Wallpaper has only just released his debut album, Glow. Gab is incredibly renown in the Australian music scene, ever since he won unearthed high a few years ago. His dreamy, electronic sounds, similar to those of Passion Pit, are instantly recognisable. With his band behind him, he highlighted a sense of unity. It wasn’t just an electronic set with a DJ, but a well-thought-out production with two other guitarists and live drums. As a whole, the music made in the refectory transported the audience to another place. With the smart input of lyrics on top of bright and colourful sounds, it makes you work for the true vulnerability within Japanese Wallpaper’s work. Japanese Wallpaper has proven himself to be not only a talented figure in the Australian music scene, but an essential one, and his set at Stonefest cemented this.

After Japanese Wallpaper, I had Grease Monkeys and it was delicious! A giant connect four was behind us, with people constantly rotating around it, and comfy bean bag chairs with friends gathered in huge circles you had to step over.

When my burger was finished and I had licked all the salt from the chips off my fingers, Thelma Plum was next.

Thelma Plum, like Japanese Wallpaper, has also been around for a few years. Having released her highly anticipated self- titled debut album a few months ago, Stonefest was certainly in for a treat. Launching into songs like “Clumsy Love”, “Better in Black”, “Homecoming Queen” and “Nick Cave”, she explores societal issues and her own personal growth with an honesty that is impossible to ignore. In sharing small anecdotes and stories in between songs, Thelma made the refectory seem like a smaller venue, creating a level of intimacy. When artists tell stories on stage, I often feel like I have a secret glimpse into their lives that only friends get. So when Thelma does this, it’s not an exception, and I feel like we are friends for the short time she plays. When going to a Thelma Plum show, you always take away a warm fuzzy feeling and thankfulness for music.

I was most excited for Example. I was excited mostly for the sake of my 13-year-old self, who danced in her kitchen to “Changed the Way you Kissed Me” countless times. I was excited for her, and by the time he came on I was practically jumping out of my skin.

Example has been a club staple since 2012, featuring heavy bangers paired with quite emotional lyrics. From the U.K., it was extremely exciting to see that he was featured on the line up for Stonefest. With a DJ hyping up the crowd before his set, Example sprinkled his set with classic club tunes, and the refectory was transformed into a rave. Everyone was dancing and having a good time, and his recognisable tunes, like “Kickstart” and “Changed the Way you Kissed Me” haven’t aged. They are equally as entertaining and easy to dance to as they were in 2012. Although Example has aged, his stage presence and music hasn’t. He brought an undeniable energy to Stonefest that left you tired, sweaty, but undeniably happy.

After Example, Mallrat was the perfect person to keep energy levels up with her contagious tunes.

Mallrat has released three EP’s and has named herself the Princess of Brisbane. The title is fitting and well deserved, rapping with easy flow over sometimes dreamy and sometimes boppy beats, she radiates an energy of quiet confidence on stage. Stating that she and her DJ/best friend had only just hopped off the plane, they still brought an immensely enjoyable set. Opening with “Tokyo Shift”, she immediately set the scene for the rest of her performance. Having just released her most recent EP, Drive, Mallrat brought Japanese Wallpaper on stage with her to perform an acoustic version of the single from the work, “Charlie.” The lyrics are some of the most vulnerable I’ve heard from the rapper/singer, and they were made all the more prominent with the accompaniment of a simple guitar. Mallrat has fantastic things ahead of her, having supported and toured with the likes of Maggie Rogers, and it was a treat to see her at Stonefest.

Skeggs was on right after Mallrat, so a crowd started swarming into the Refectory. The security did a fantastic job with crowd control, keeping one staircase for going downstairs only and another for coming up from the hub. Because of this, it was easy to get downstairs in time to see British India.

I saw Skeggs at Yours and Owls a few weeks ago (they were so good!) so I saw British India instead. British India has been around for ages, having released their first album in 2010. Their most prominent album was released in 2015, Nothing Touches You. It features songs like “Suddenly” and “Wrong Direction”, which they brought out in their set. Watching them perform, I could tell they were polished. The band had a certain comradery in the way they performed together, unleashing on tracks and bringing a passion to them that a recorded version sometimes fails to bring forth. The band also mentioned they had a new drummer, and it was his second gig performing with them. I couldn’t even tell that he was a new member until they mentioned him doing a great job, which shows just the level of professionalism of the band. British India brought a positive vibe to the audience, with everyone sharing the same happiness and content of juts being there, and being in the moment. It was a fantastic close to Stonefest and wrapped the whole vibe of the festival up amazingly.

Overall Stonefest, I can say, was a massive success. The staff were lovely, the crowd was supportive and respectful, and the performances amazingly delivered. I will definitely be attending next years!