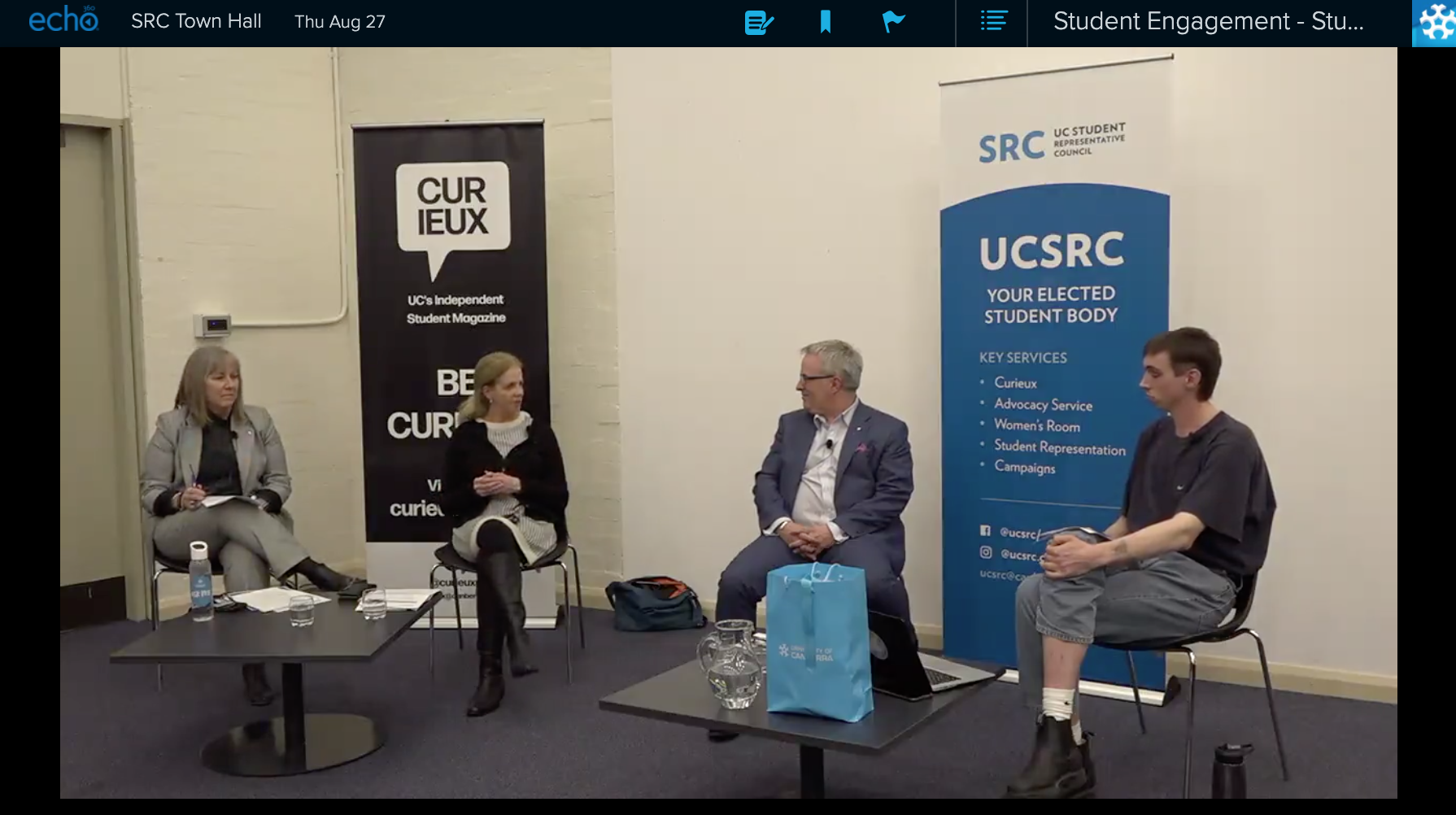 The event, run by the UC Student Representative Council (SRC), was an opportunity for students to ask questions directly to Vice-Chancellor Prof. Nixon and other prominent UC staff.

However, the majority of student-submitted questions were ignored.

Of the 25 questions submitted to the SRC via an anonymous portal, two were addressed solely as an online response by the SRC, eight were addressed at the Town Hall, and 15 were overlooked.

This Town Hall comes after UC transitioned to a combination of remote and in-person learning due to COVID-19 restrictions, student protests over the use of online proctoring during semester one exams, and announcements from universities Australia-wide of job reductions and financial stress.

Mr. Jackson questioned Vice-Chancellor Nixon on UC’s current financial position. UC is in a better position financially than other universities and ‘this year isn’t actually too bad,’ Nixon assured students. Although he noted that the shops and services at UC have suffered from fewer students and staff on campus.

Prof. Nixon also said that there would be lost revenue from a reduced number of international students.

“Yes, I think we are going to have to make some challenging decisions, but we need to do those openly and collectively, and we’re not quite at the stage yet,” he said.

When questioned on the potential for future changes she confirmed that other measures may be considered but they will “have to see what happens.”

Continuing from Semester one Mrs Eversons said, “if your GPA drops you can have it amended.”

She said the university has also encouraged teaching staff to consider alternative modes of assessment to exams if possible.

While many students were displeased with the online proctoring systems implementation, Mrs Eversons reiterated that “all units with proctored exams should say so on unit outlines. Some units need to be proctored to prove academic integrity in the field and ensure the unit is properly accredited.”

Dr. Weekes spoke about the importance of connectedness and student wellbeing. She referred to the fact that medicine and counseling have been open throughout the pandemic, and encouraged students to keep their own wellbeing as a top priority.

Both Dr. Weekes and Vice-Chancellor Prof. Nixon stressed that medicine and counseling services were not at risk from the strains of the pandemic.

The failure of the SRC to ask questions submitted by students calls into question their ability to adequately represent the student body.

The Semester one Town Hall, held in May, saw multiple students questioning the SRC directly. They called for a restructuring of the SRC and many comments state that the current SRC is not adequately representing the student body.

One student stated, via the semester two Town Hall anonymous portal, that the SRC had previously been non-responsive to students online, and questioned the accessibility of the Town Hall.

A full list of anonymous questions and comments submitted to the SRC can be found here.

The semester two UC SRC Town Hall was recorded and can be viewed on UCLearn by joining the UC SRC canvas page.