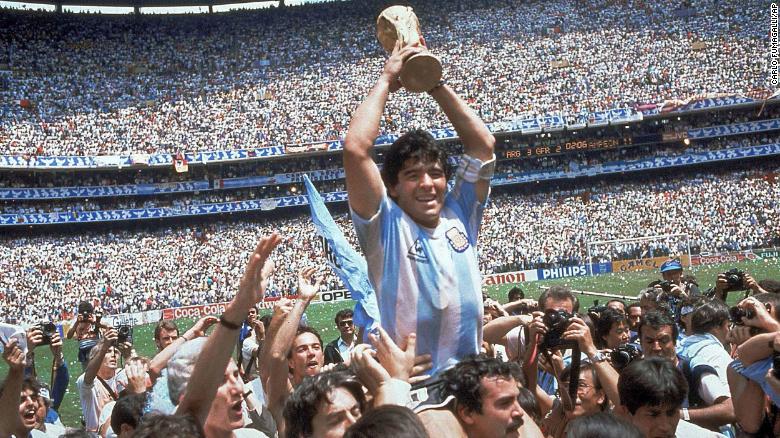 De mortuis nil nisi bonum. Of the dead, say nothing but good.

Maradona is the latest in a long line of influential figures to have passed away. Surprising as it may seem, he is not the first, and he will not be the last.

Most people who have heard of soccer have heard of Argentinian football player and coach Diego Maradona. His on-field exploits are the stuff of legend. For many, that’s where their knowledge of his story ends. Others who have followed his career further will know him for his life of controversy and scandal.

Many if not all the articles written about Maradona start with several paragraphs of an overly melodramatic description about one of his acts on the pitch. Instead, I’ll start with this:

Diego Maradona was a renowned asshole. As much as everyone in the footballing world likes to make jokes about his constant drug use and comedic managerial career, Maradona has lived a life of genuine scandal that has constantly been trivialized and ignored. Why? Because of cliché lines such as; ‘oh it’s just Maradona’ or ‘it’s Maradona he can do what he wants’.

Maradona’s career in Italy came to an end with a 15-month ban for testing positive for an illegal substance, and he was subsequently arrested on the other side of the world for possessing cocaine. During his life in Italy, he was known to be associated with the mafia that essentially ran Naples, and many dramatic tales have been told from these ties. Take the example in this NY Post article of a pseudo fan interaction while trying to order prostitutes.

In the years since retirement, he has admitted to fathering several children through multiple affairs, some of which he refused to acknowledge until the mid-2000s. In more recent years, he has faced allegations of domestic violence and sexual harassment; the list goes on.

To say the least, throughout his career, and particularly in the last decade, Maradona has been a controversial and largely disliked figure.

All that dislike changed on the 25th of November; the day of his death.

Maradona’s death was responded to in an outcry of messages on social media from footballers, football journalists, and fans alike. Images of thousands’ mourning in public spread like wildfire across the mainstream media.

Every publication swiftly published their article or clip. Everyone rushed to praise him for what he accomplished, quietly brushing aside who he actually was, or relegating that to the end of their piece. Even those who acknowledged his controversy failed to do so. Take this article published by The Australian ‘Let’s not sugarcoat who Diego really was’ as one of many. The title suggests the article will discuss something of the man ‘Diego’ was rather than just a puff piece worshipping the ground the Argentinians boots tread. Does the article mention his premature death may have had something to do with a certain powder inhaled through his nose? Yes. Does it further discuss at all who he was as a person and why he was so controversial? No.

It is yet another piece marveling at his very existence. It is by no means the article that follows this exact formula of promising complexity but delivering a piece with less substance than a packet of chips.

Even articles promising a more direct summary skip some of the “less savory” details. Take this Fox Sports article, which mirrors the technique; headline promising controversy but a vanilla copycat article that largely ignores any controversy and leaves in one or two bits at the end of the piece.

We go through this same cycle. With every celebrity death. Sometimes, the media becomes self-aware enough to write about it for themselves, for example, the piece ‘Why is it still so taboo to speak ill of the dead?’ found in the Sydney Morning Herald. Yet we seem to forget the lessons we learn every time.

The article that best highlights my point is from the Guardian, written by the director of a documentary about Maradona. They write “he was the greatest but he was flawed”, without describing his flaws. Prima Facie the article is another of the same kind of piece I’ve discussed. In the article, the writer describes an interview with Maradona, who behaved incredibly poorly and when reading between the lines, it seems that this was a consistent theme throughout his life.

This is not to say that only negativity should be given to people like Maradona. Of course, it must be acknowledged what he accomplished on the field and what he represented off it. People in the real world will feel an emotional impact. This AlJazeera piece captures, in photographs, the deep sorrow felt by many at the loss of their hero.

This is not a hit piece on Maradona, as he is simply the latest in a long line of people to die. What this article merely asks for is two very simple things:

To the mass media I ask this; do better. Be better. Learn from the past, recognize the complexity of people without whitewashing them or putting them in the boxes of ‘good’ or ‘bad’. Be different. Be interesting. Look up ‘Maradona’ – every single article you read in every paper in every language across the world has several pars describing his miraculous deeds on the sake of the pitch – we know. Look up articles and tweets from a year ago, they’re all extremely negative and critical. Write about his life in a truly accurate way. Write about the people he impacted rather than just his acts on a pitch – the good and the bad. This is something every first-year journalism student is told and it is disheartening to see the absolute failure of this in the professional world from the publishers’ I used to admire.

To the humble reader of Curieux (who I presume Rupert Murdoch is not, as he may dislike the fact he doesn’t own us yet) I ask more simply; think. Read the articles I’ve mentioned. Read this article. If you agree, great! If you disagree, even better! Think about why, use the brain you’ve been gifted with to consider all aspects of every situation, discuss it with your friends, leave a comment on the article calling me a prick, engage with the world in any intellectual capacity you desire. If you passionately disagree with me you should write your own article and tell me why I’m wrong! Remember, I’m no better or smarter than you because I’ve written something, and neither is any ‘real’ journalist.

“Ladies and gentlemen, it behooves you when a famous person dies, blame the year and make it about you.”

One thought on “Remembering Maradona”