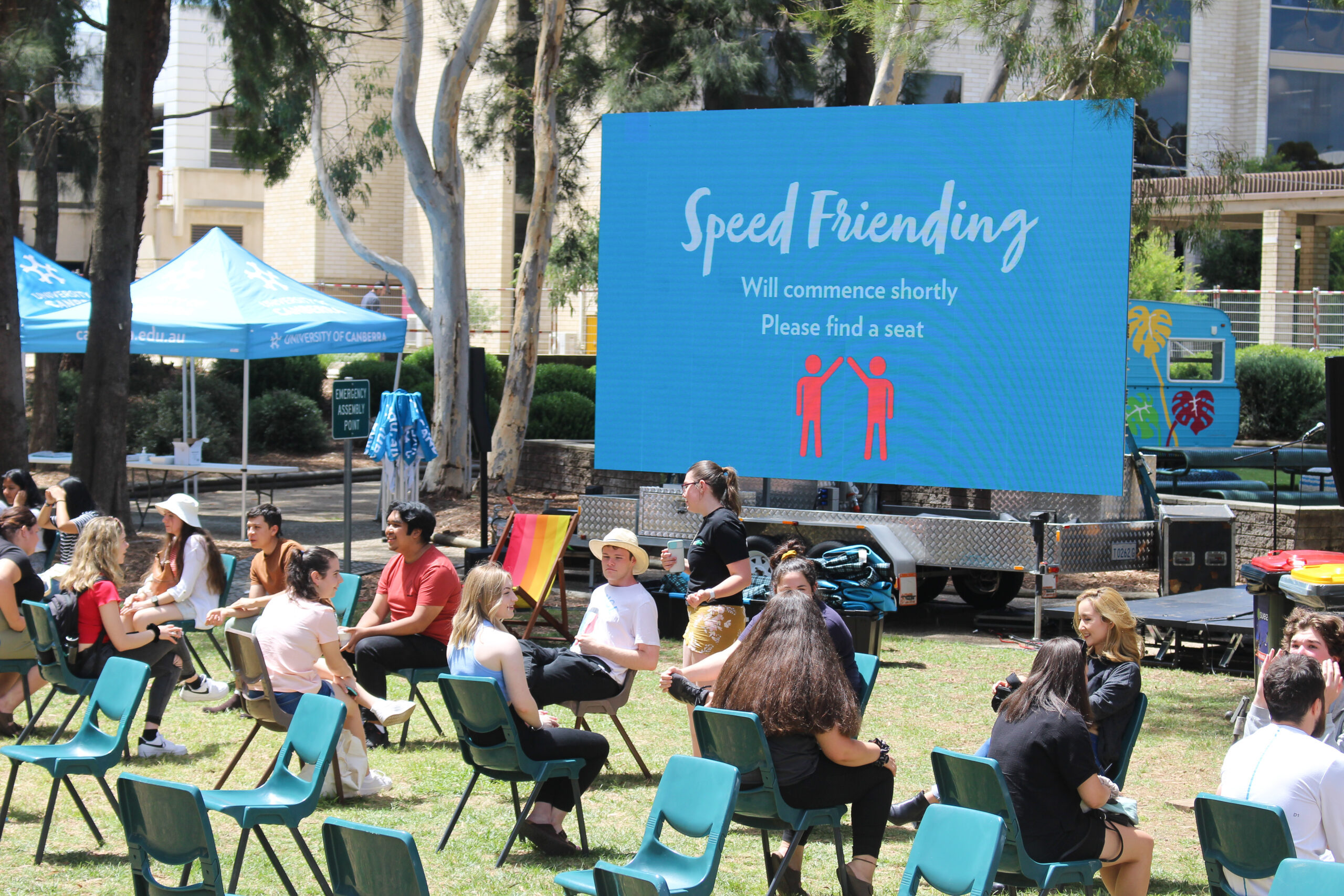 UC’s O-Week speed friending strips back the first stages of friendship to a 5-minute chance to chat.

Thanks to COVID, spaces at this year’s two speed friending events were limited, but with all the seats booked before the week even began, a third session was opened. The huge interest from students and the event’s 5-year history of success was clear at the first session with students lined up around the concourse waiting to join in.

Most people want to make new friends. The desire to socialise is human nature, but the anxiety of approaching a stranger can hold us back. It’s a leap of faith, hoping that this total stranger will like you, that you’ll be able to have a conversation that flows. Speed friending takes a lot of courage, but the leap of faith isn’t placed on a single interaction, it’s the courage to join in. After all, an awkward conversation is just that, one interaction that ends with the ring of a bell and is replaced with excitement and a new opportunity.

We often look at making new friends from a very casual perspective, particularly at uni. They’re my new roommate so I guess we will hang out; they are in a few of my classes so maybe we will study together. Despite our ‘we’ll see how it goes’ approach, not all of our friends will be conveniently placed in our life; repeatedly thrown next to us until we eventually form a bond.

Speed friending is a chance for you to meet people that you would normally just pass by. You’re thrown into the deep end and, if you’re willing, you just might swim.

The 5-minute time limit definitely has its benefits when you’re stuck in an awkward conversation, but it also has some pretty big drawbacks. How can you begin a relationship in such a small period of time? How can you know if this person is, or isn’t, worth investing your time in? And more importantly, how can you make sure they want to get to know you?

Aus is a fourth-year Events and Tourism, and Sports Management student, and after spending last semester studying online, he wanted to reach out and grow his social group. He joined the online speed friending session from his parents’ home in Wagga Wagga during o-week and started chatting.

“It’s a little bit [awkward],” Aus told Curieux. He made an effort to be an instigator in his groups, asking questions and encouraging others to chat.

The online speed friending was run slightly differently from the in-person sittings. “We were in groups of three or four, in blackboard in canvas,” Aus said the group setting made it a little bit easier to chat.

Some groups were “giggling the whole time,” and others were filled with moments of silence. But prompting questions from UCLife organisers broke these up and, after meeting around 20 people, Aus left with contact details for five new friends who he never would have encountered if it weren’t for his speed friending experience.

“Some people said they were doing masters, […] some people were actually overseas,” of the five people Aus met and clicked with, one was in India and another from Perth.

“You want some kind of connection,” Aus said, it wasn’t just a social group he was looking for, personal connections are important when you enter the workforce.

When classes are online, you miss the opportunity to meet peers that may one day be working in your industry. Speed friending at university can make lifelong friendships or great industry contacts. But if you don’t put yourself out there, you’ll miss out.

With a 5-year history of success, you can bet that speed friending will be back at UC next o-week. All you need is the courage to get involved.